The next public venue for my work, I am happy to say, will be DCs Artomatic. Today Bryan and I took the metro downtown for the mad dash for a good space. Artomatic, although having gained a great reputation for gallery scouting, is a bit of a free for all when it comes to artists. You register and then all the artists that made it in are assigned a date and time to come and grab a good spot along with about 30 others at a time. I am really lousy at things like this akin to open seating at a concert. Maybe it is because I am not quite five feet tall, and so anything that requires pushing your way through has no appeal for me, in fact scares me. But I was pleasantly surprised. They actually have a really good system and I was amazed after hearing that 1500 artists will be showing, that they managed to keep it pretty organized. The spaces are either 8 x 8 or 8 x 12 feet, and although I was hoping for a larger space, my first criteria was to get the first space as you get off of the elevator on our assigned floor. Our group had the choice of 3 or 8 and there was a dash for three so I opted for eight and got my pick. Phew!

Having attended this last year I experienced how daunting the sheer number of works is and knowing that the viewer can get a little weary, I was hoping to get a spot that would catch attention early. Last year we chose to start at the top and work our way down, so assuming others might do this too, I have a good spot. 50 thousand attended last year and they expect 70 this year for the 10th anniversary.

here is my space. Each artist can paint or embellish their space however they see fit. Of course this prompted a brainstorming session on the train ride home. 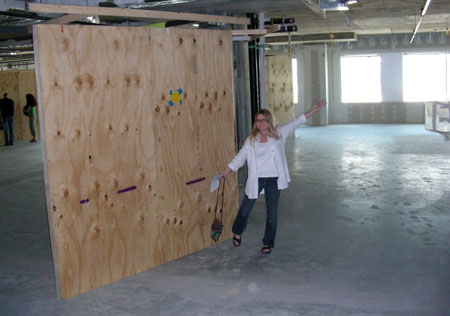 the view of the Capital from the venue 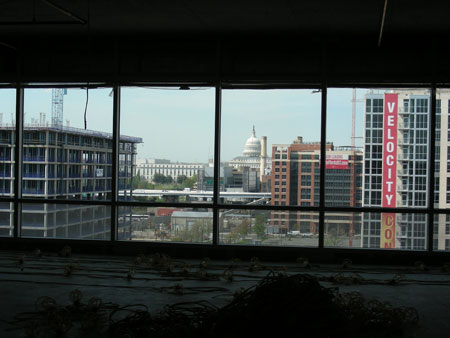 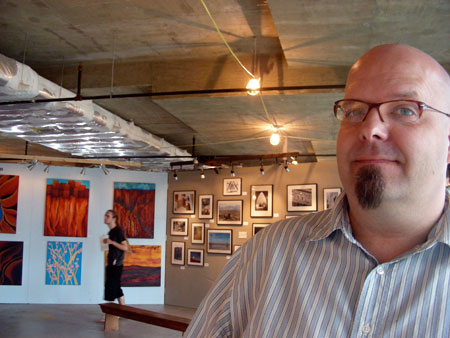 happy earth day! looking through the lens of the lost 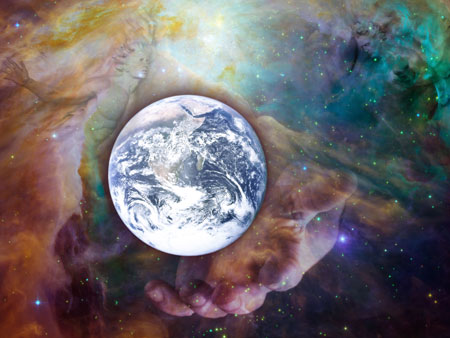 A digital composite that I did for visualplanet.com a for earth day. It is an image of Orion and earth from Nasa(public domain), a photo I shot of the real exnihilo sculpture from the national cathedral, and my husband's hand.

Being good stewards of the earth was (according to the book of Genesis) our first and only assignment (well, and multiplying). It kind of astonishes me that this calling gets swept aside by many christians just because Al Gore managed to brand it.

While Bryan and I were perusing some galleries some months ago, we entered a potter's studio as she was working. She pleasantly invited us to have a look around and it was only two glances in that it was obvious she was a christian. She had a mirror on the wall in front of one of her potter's wheels that had something about prayer written above it. Little warm and fuzzy "spiritual" things were throughout her studio, and once my husband opened the subject with "what church do you go to?" we were treated with a kitchy church commercial streamed off of her laptop with her pastor as the starring role preaching against ego.

I found that kind of funny.

At any rate we revealed our "kinship" as fellow believers in christ which opened up this woman even more.

That is when things got ugly.

I was admiring her studio space and inquired about the cost of renting a space in the venue. She, continuing to be cheerful, began to talk about the folks in the building and made it clear that her neighbor was the "wrong kind of people" and would love to "send her packing". Wink wink. Then she talked a little about an upcoming event that the co-op was doing and it was "green", which was when she made it clear how unimportant THAT was and expressing her disdain with, "I don't cotton to all that Al Gore stuff". Wink, wink.

I felt like my head was going to explode. And I was reminded AGAIN why our prolonged sabatical has been so spiritually healthy. Backing away from the coolaid trough has helped me see a little bit as one who I would have otherwise labeled "lost" before. How we treat others and the earth is our witness, which is why the scene in the potter's studio made my head spin. In less than half an hour I knew that this woman did not love her neighbor, apparently didn't care about stewardship, found it very easy to judge others, all while christian music was playing in the background.

All because she thought I was part of the "club".

Now before you point out that, ahem..., blair, aren't you judging her?

Yes, I admit It, but what I can also say, is that at one point, I was her. And somewhere along my journey god gave me the choice to take the blue pill or the red pill and ride the painful birthing guantlet out of the plastic bubble.

And it was indeed painful. Identity stripping, crisis-of-faith, which-way-is-up, painful.

But it was also something else.

I am coming up to my fifth anniversary of this blog (May) which also means that I am coming up to the fifth year mark of being outside the bubble, orbiting the giant hairball, being backslidden, on sabatical, or whatever you choose to call it...out of the church, at least as an attendee.

And god is here. On the otherside.

Of course the journey continues, but sometimes there are spots in the road that have a clear horizon and others that make you feel like you are standing in a thick fog. Five years ago the fog had come in and yet there was still a spiritual beacon of light. Being a follower is like that. Today it is easier to look back and see some of the why's that god sought the unconventional from us as a family. And there were things that we had to give up which I still question god about. But having a new lens to look through has been a gift. And I am in no way suggesting that someone else's journey should look like mine. God leads without formula.

But I do know this. Christ called the pharisees of the day, "whitewashed tombs". And I am pretty sure they felt like they were the apex of spirituality, doing all the "right things". In like manor, all the christiany trappings, music, slogans, political affiliations, christianese jargon, and going to church, does not make a follower of christ.

When god peel's back the fuzzy sheep's clothing will he be able to find a substance of faith or a rotting carcass?

life in balance or maybe not

Been working and clearly not blogging (not that one necessarily excludes the other). With the return of that evil labyrinthitis a.k.a. Vertigo, I have conserved my seeing-straight time to anything work related cuz by three oclock staring at a computer screen has me cross eyed and headachy.

But I also know that in a year I will look back on my blog and try to remember what caused the gap, because let's face it I can't remember what I had for breakfast, so forget a lost month in 09 without appropriate notes.

So, I am still spinny but will forge ahead because a lot has taken place in the last few weeks. Daniel is off at an arcology workshop at Arcosanti in Arizona, the sun is finally out which means the plants are up and this weekend Bryan and I pounced on the opportunity to get outside and add to our landscaping project three years running. 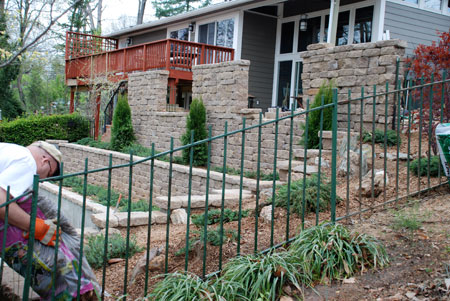 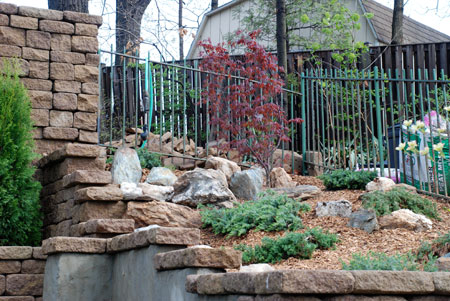 why we bought an element... 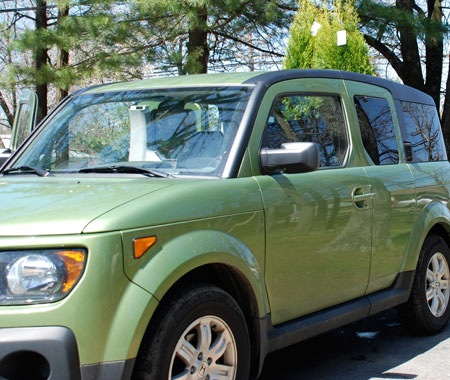 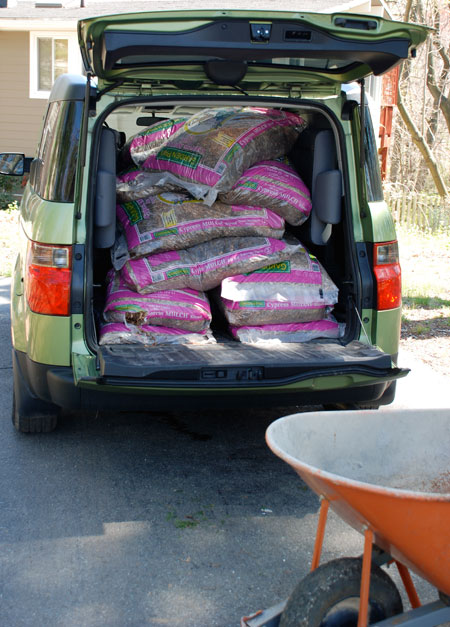 This page is an archive of entries from April 2009 listed from newest to oldest.

March 2009 is the previous archive.