By sunday night we just couldn't muster one more brick. Its not that the bricks weigh eighty five pounds each, or that they are almost impossible to get down to the second tier level from the pallets...

The painstaking part of getting this first course level almost drove me insane. If there is one pebble that is making the brick lean even a sixteenth of an inch you are screwed by the time the wall is four feet tall, because that sixteenth will get magnified. So this part is like the most important part of the whole process.

And it is soooo boring.

It is like the bottom part of an iceberg. You know, the two thirds underwater part that you don't see? You are unaware of it but it is holding the whole thing up. Apparently the same is true for dry stacked, pinned retaining walls.

And leveling these things is nuts. My little bullet level got full use as we placed brick after brick, testing, nudging, beating with a rubber mallet, brushing, and some of them we had to remove multiple times to get it right. There were moments that I wanted to chuck that level into the woods.

So after working through the heat and frustration, at about five oclock the mosquitos started to come out, and it was clear that it was time to quit. And a few rain drops provided us with the perfect excuse (again saved by the rain).

So we ordered a pizza.

And much later after the sun had set as we were drifting off to sleep I had to give Bryan a nudge because apparently in dreamworld he was tapping blocks into place using the rubber mallet. But in reality his hand was the mallet and my arm was the block. Kinda funny. But maybe a little crazy too.

It helps me to keep in mind what this stage represents: many weekends of digging, and hundreds of wheelbarrows full of dirt hauled. What we have got at this point is a very level portion of a first (the most important) course.

It is just six bricks short.

So you know what we will be doing next weekend. 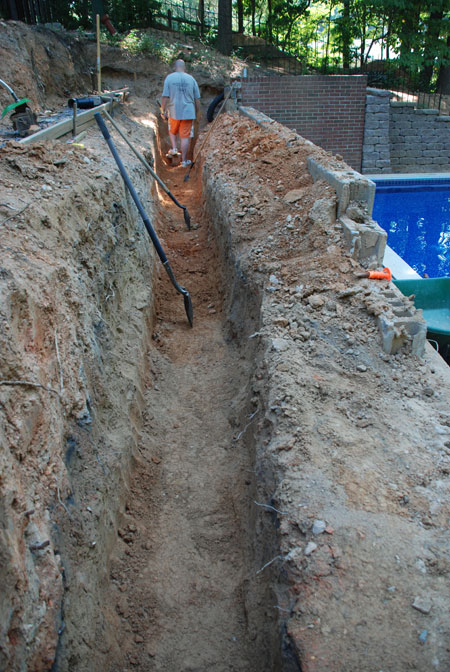 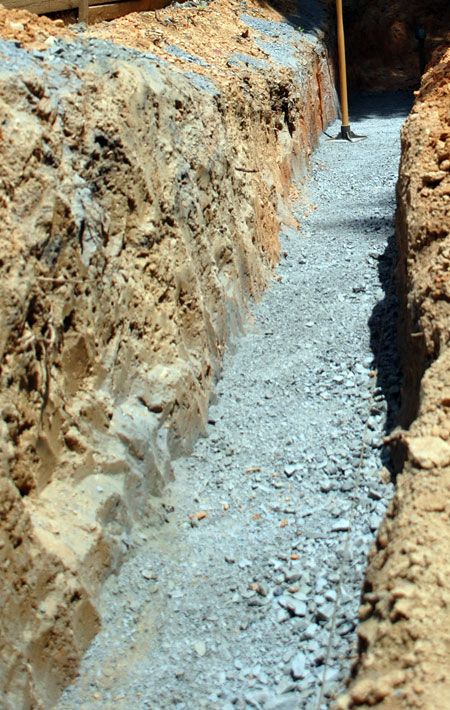 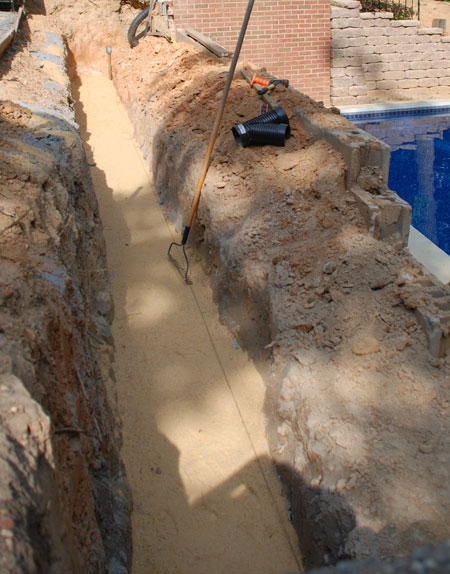 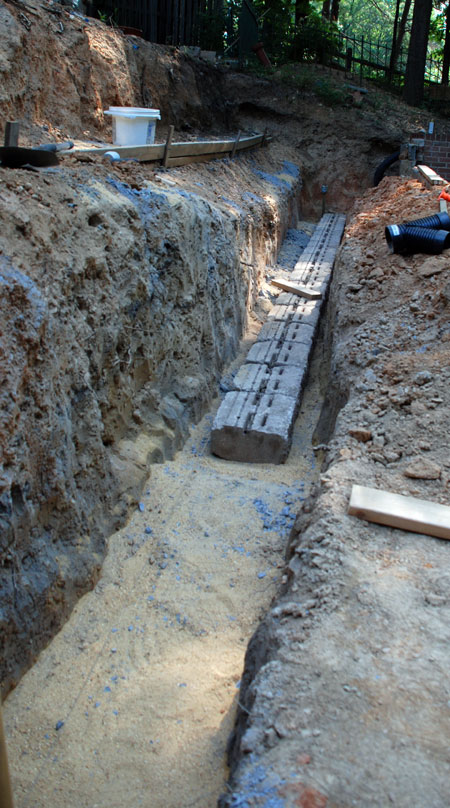 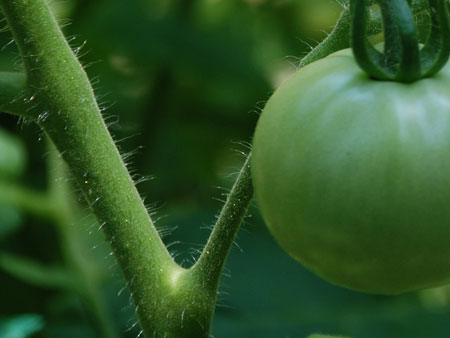 I woke up this morning impatient. Trying to pinpoint the feeling was difficult. I can only describe it as a feeling of discontent that things don't move, resolve, or have closure fast enough.

And it only got worse after my morning coffee.

The feeling is familiar though. It tends to be the poker that prompts me to go about the daily things of life, get things done, keep things going. And that can be good...

but it has a darker side.

This is the opposite of being "content in all situations", and I think it stems mostly, or at least is fed by the tone of the culture that we live in. Not that culture is completely to blame. My own desires factor in for sure. The question is where does desires intersect with the functions of daily life, and at what point does having a particular thought that evolves into a desire become a want?

Every human everywhere, we all desire basic things. But want is something that seems to throw things out of kilter...

And for me right now, I just want everything to be done, finished and resolved.

And I want it now.

Looking outside at my herb garden and my tomato plants that have gotten five feet tall I am reminded of what it means to be patient. One thing that gardening does is teach you patience. Everything about it requires pause. Composting is a process that takes months, even years. Plants that fruit or flower only after years of cultivation can remind you of where you are in the scheme of things. If you really contemplate it that is.

Good things come to those who wait.

In the last episode our heros were somewhat discouraged by the overwhelming nature of the task and the seeming lack of progress. Taking full advantage of the holiday (being a day off from work) our dynamic duo takes another stab at it.

This time employing a bit of a mind game motivational tactic of counting.

Using increments of ten wheelbarrows hauled, we took a break between sets. It may sound silly, but having mini finish-lines made the difference. It did two things; made us push to each number ten (you get tired at about seven) and, more unexpectedly, it kept us from overdoing it. Last weekend we were sore and exhausted from the fits and starts, sprints and endurance runs. It took its tole. Today was sort of a rhythmic cycle that kept us motivated but not overextended.

85 wheelbarrows hauled and 16 old bricks removed by five o'clock and we were feeling pretty good. 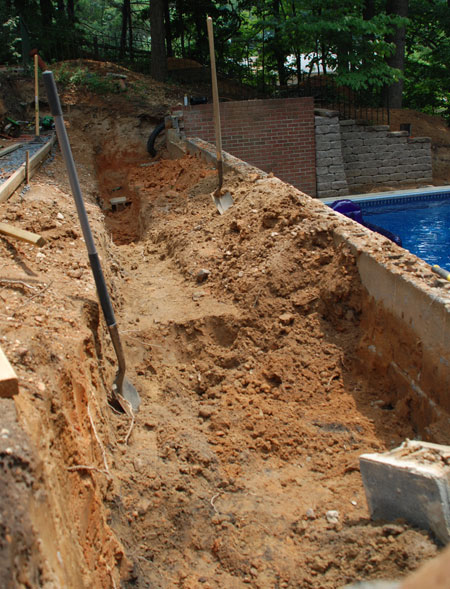 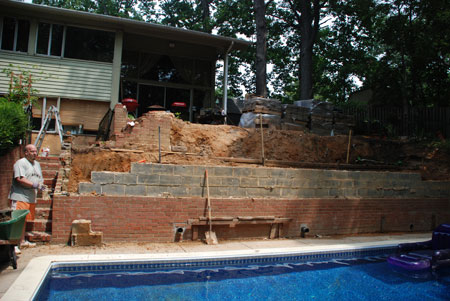 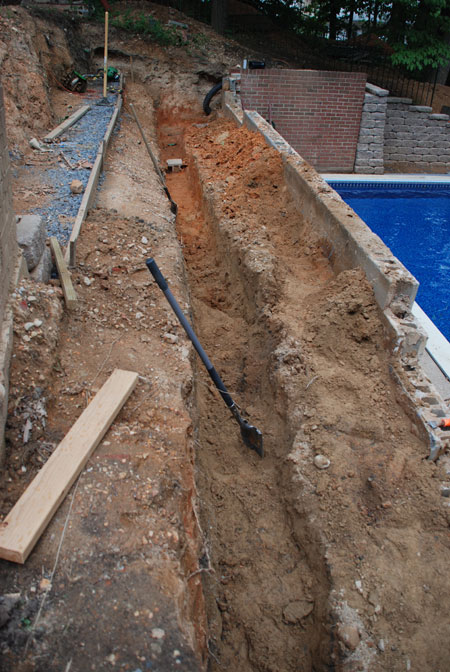 The trench is well on its way. Another day and it will probably be ready to put in the crush, sand and then...

maybe a brick or two. 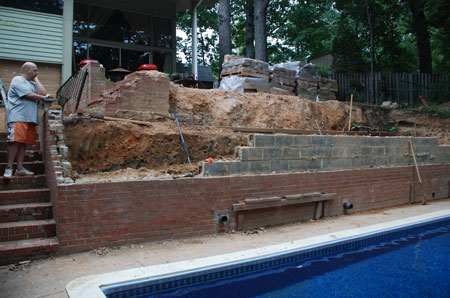 then it started to rain 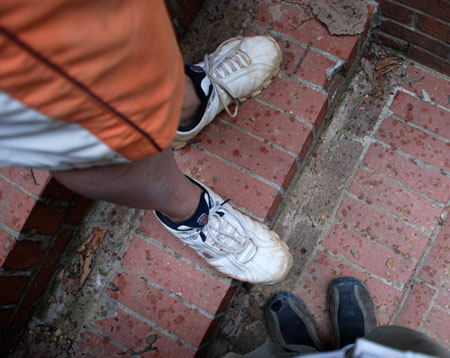 So, of course we ended the day with some good food, wine, and a movie.

Ok, I think I am going to make the transition from my shiny green notebook (that used to keep me organized) to this.

When it comes to making my lists I have always been a pen and paper kind of gal. Right down to using a purple pen to check things off to give me the added satisfaction of finishing something. (yea its a quirk, I'll own it). But the notebook has lacked the sophistication to keep up with the oodles of projects I've added to my life of late. And when a system doesn't work well, it doesn't work at all. Stuff starts to lag, or fall off the table and that is frustrating. Fortunately during one of Bryan's regular surfing sessions he bumped into this great piece of software. Its features are perfect for this intj. It even links to ical.

And it is free. Gotta love the net. Two clicks and I was setting up my new system.

So now I am officially going high tech.

Someone want to break the news to my purple pen? 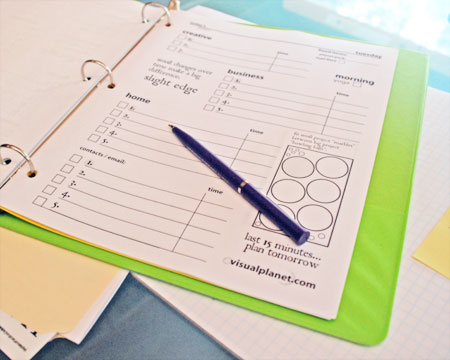 How to embrace progress (or lack thereof)? Celebrate it.

So with the weather being so beautiful lately that was grounds for a picknic by the pool in the shadow of the unfinished walls. 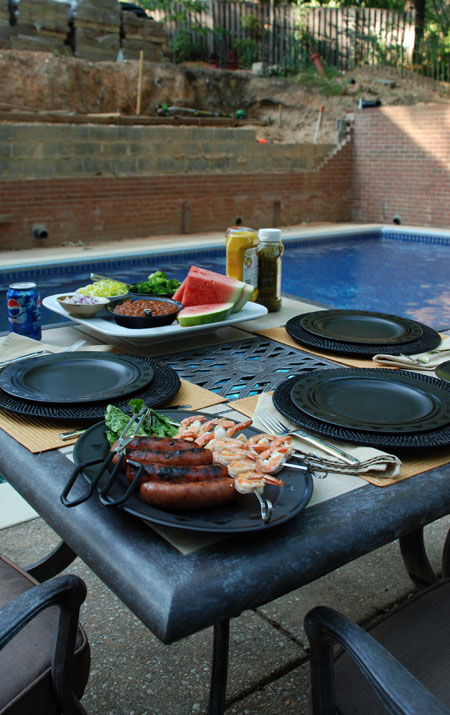 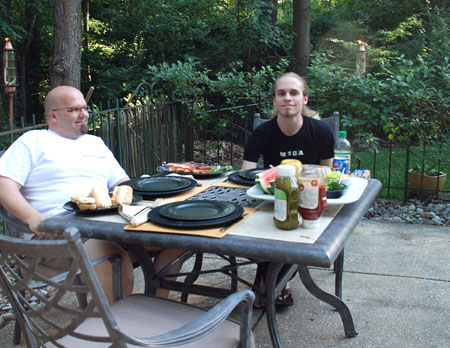 This last weekend we took another stab at our backyard "project". Right now that word just seems way too small for what we are tackling. And yes I can see you shaking your head as you view these pictures, and I can read your mind as you think...

Today I will totally agree and shake my head right along with you. Because we are at that awful stage...

You know the middle. It can be any project, but bigger ones it is more pronounced but either way when you hit it you may hear that sound, like the grinding of gears coming to a halt.

The middle is that desert of motivation. You spent all of that on the inspiring idea, and all it took to get the thing going, but now the momentum has stopped and it feels as if you are stalled. The middle is also far away enough from the end that if there is light at the end of the tunnel you don't see it because you are busy looking at your feet.

Or in our case a whole lot of dirt.

As we sat down by our pool in one of our many water breaks, looking up at the would be wall, I tried to remember that the scope of this project and its labor is in direct proportion to how great it is going to look when it is done.

A few weekends ago Bryan actually finished this first corner wall which was a challenge. This is the wall that he worked on with his dad. And seeing this helps us remember why we started this in the first place. 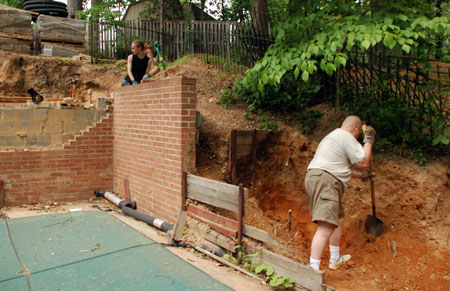 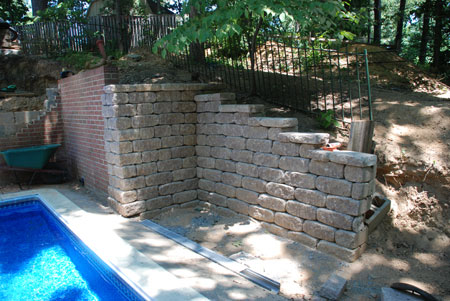 When we bought this house that had "good bones" we also inherited some failed systems like the big brick retaining wall. This side section was a particular eye sore having been rotting wood held up by steel rods. That was holding the dirt back from falling into the pool, and as you can imagine, not only did appear in disrepair, it didn't work. So now we have the spiffy new corner wall.

Onto the big one. 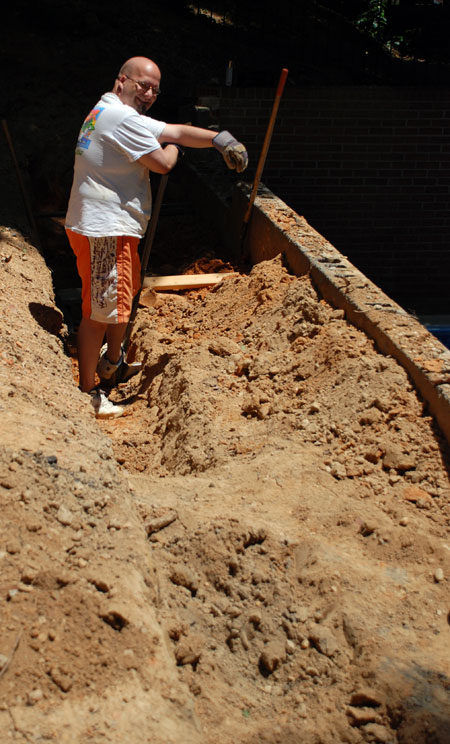 The plan is to terrace it in three sections using the stone for the upper two and stuccoing the exiting brick wall. The front wall that used to be six foot high, will be three feet and stuccoed. That is the plan anyway. The stone we are using is Versa-loc mosaic. It is pretty cool.

The most disheartening part of the process is moving dirt away from where the center wall has to be built, only to bring the dirt back again for back fill. And although our property is visually more interesting because of the slope, it makes for a real challenge when your are hauling wheelbarrows full of dirt up hill.

digging the trench for the center footer

The only reason I am in this shot is because Bryan grabbed the camera when I actually had a shovel in my hand. Most of my job was hauling the dirt away. Bryan has been heroically doing the lion's share of the digging.

Hey, he has bigger forearms than me. 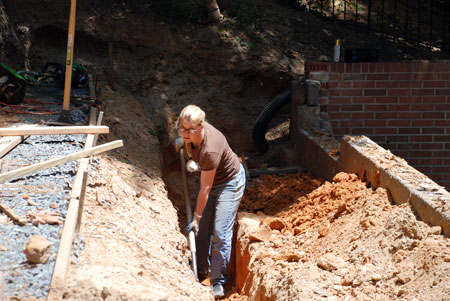 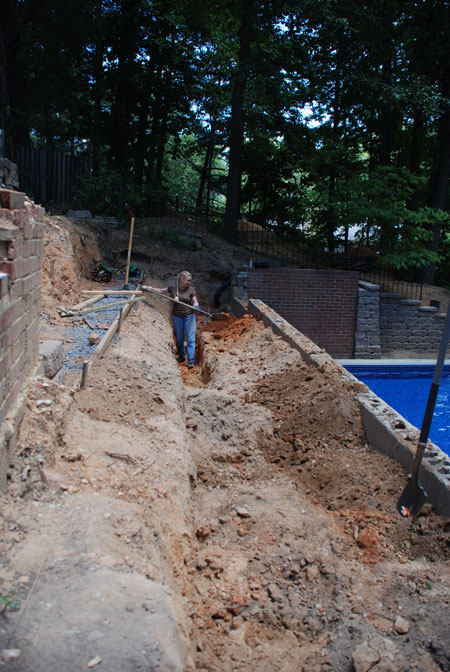 I have to laugh thinking about how we started out the morning. Laying in bed with the tv on trying to muster the energy to dig some more, we watched a few of those diy shows where some unsuspecting couple lets a team of tv people come and redesign their yard involving them in the process. So what you see when you watch is this amazing amount of progress from seemingly a handful of people. What you don't see is the crew of laborers that jump into action when the cameras are off. So we watched a few of these shows and laughed at "those people".

Then we went out to dig.

One thing I suggest for anyone trying something this large is not to say on a given day, "this is how much we are going to get done". It might be too much and that might get discouraging. Being stuck in the middle this weekend, we had hopes of at least having the trench dug.

Anyway, I do hope that by the end of the summer we have the walls done. Unrealistic?

This page is an archive of entries from July 2007 listed from newest to oldest.

June 2007 is the previous archive.