Artist date. Last friday and today and I am here. This is the first piece that is somewhat representational that I didn't sit around and think about or sketch first. I literally showed up at the canvas, grabbed some yellow paint and began, having no idea what would come out. As I worked the content became clear and that directed me toward the "creation" theme. I stopped for today, and have no idea how it needs to be finished.

Maybe I just need to show up again next week and see what "it" thinks. ;-). 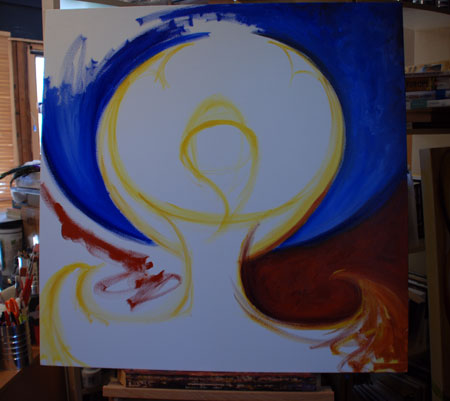 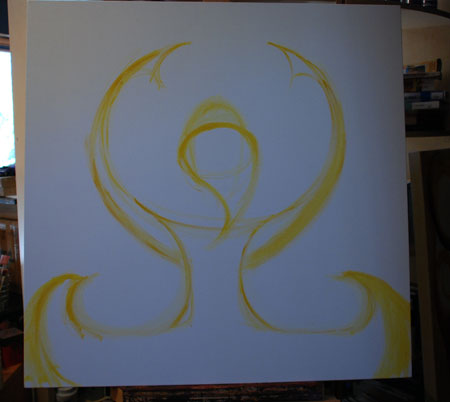 What better way to celebrate a weekend morning then with these. Thanks sis for giving Bryan the recipe! Belgian waffles, blueberries, whipped cream and french press. Yikes! 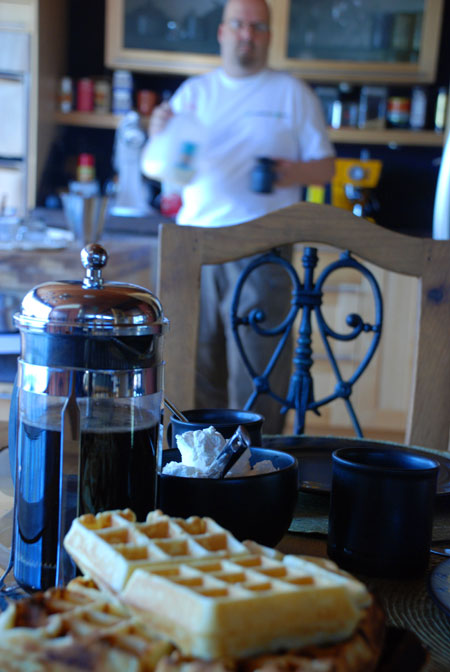 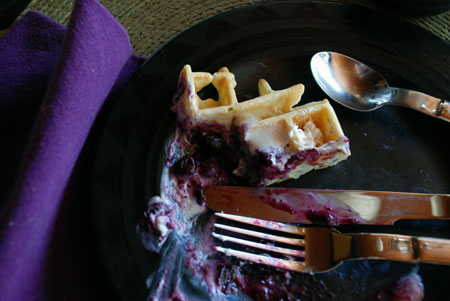 the work keeps getting bigger

After leaving the conference in Philly at noonish, Daniel was due back in Baltimore for a 4 oclock class involving an important final critique. So we zoomed back. The real trick was that the piece that needed to make an appearance was in his studio space in his apartment. He had planned on grabbing a friend to help transport this work by hand, four blocks and three flights of stairs to its destination.

well someone had to hold the camera.

Walking down the street... 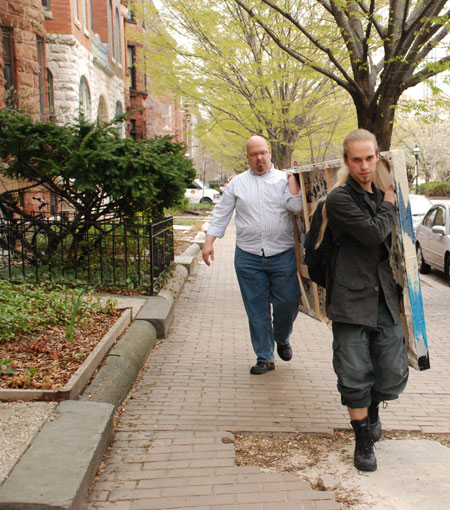 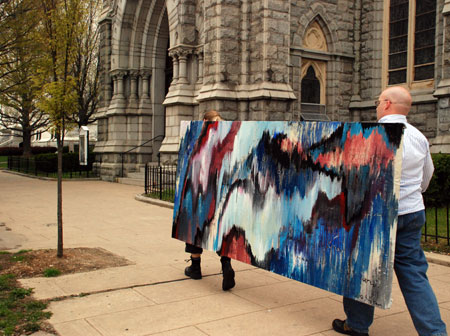 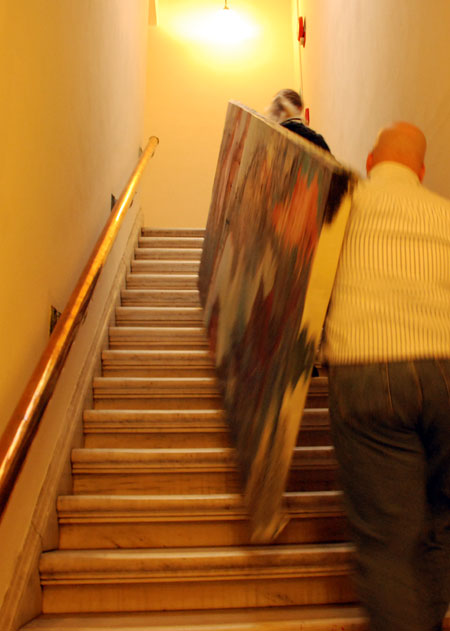 good luck with the critique! 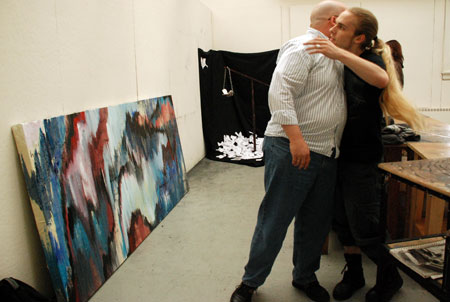 It is great to encourage Daniel in his spiritual journey. Our paths as parents have been to go before him. Now as he is finding his own direction (just as we did) it is fun to see how our paths criss-cross, interact, and otherwise support. We played taxi and upon dropping him off we bumped into this friend (the godfather) who kindly introduced Daniel to some others who do serious ministry "on the ground".

This particular conference was one that (even though we would have loved to attend) we intentionally excluded ourselves so that he could be there among those heavy thinkers that inspire him without a parental presence interfering. If god gave us a path to follow that looked different from our parents, then Daniel's surely will look different from ours. All moves forward. Here he is right after the event, exploding with ideas. 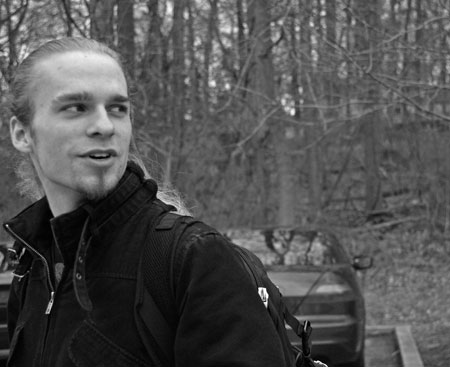 a glimpse of understanding happens only in the humble

Last week while Daniel sat at the feet of the great philosophical minds of our time (and even had a face to face chat with one of them), I sat at the feet of so many masterpieces,the artistic equivalent, at the Philadelphia Museum of Art, beginning to glean meaning.

It is hard to believe.

That it has taken so many years for me to embark on this part of my artistic path, the understanding of the masters. Granted, there is a lifetime's worth to learn, but I guess this cracking of the door for me is in part the recognition that there is something to learn, and then getting glimpses of thoughts that come together making sense. It is a unique sensation.

Like being in elementary math when the teacher explains some equation for the fifth time and suddenly the clouds begin to lift and you get it...really get it and it is like the proverbial light bulb went of in your head. Along with that tiny enlightenment there is a sense of wonder and hope and yearning for more. (Ok I admit that a math metaphor is probably not the best example coming from me because I sucked at math, and still do unless I am working in tangible shapes, but you get the idea)

It starts with a complete humbling. A stripping away of the incessant need to evaluate the skill level of someone's work. This requires something that somehow the general culture doesn't teach us. It isn't in the water, or the food. We actually have to use our brains.

I have heard a comment spoken from a number of people at various times in several museums while standing in front of a Pollock, a Miro, a Mondrian, a Picasso...name your modern artist. It is...

Could you really? Then why didn't you?

That comment spoken out loud, when heard is the one sound that can rip me out of a sublime moment of contemplation. Contemplating the life of the artist, the profound statement that he or she is trying to make, the political opposition that was faced, the influences, limitations, economics...

safe to say they didn't just pull the artwork out of their ass.

To really benefit from the art of any artist, I think you have to get into their lives a bit. And I am not talking about the novelty factors (like cutting of an ear or commiting suicide). I am talking about really looking at what was around them in their lives and viewing the progression of their work in light of as many variables as you can find. The great artists were in pursuit of something just beyond their reach, always moving toward it and forging new paths and discovering new ideas.

Scratching the surface of the divine.

And many artists sacrificed so much for their art. Understanding, or appreciation for their work happening only after they died. That alone punctuates the prophetic nature of art.

So the next time you are at a museum and are tempted to say something smug about a work of art, try employing this little tactic that I have been using...picture yourself saying it to the artist, and imagine the conversation that might follow...

Half Past Three (The Poet)
Marc Chagall 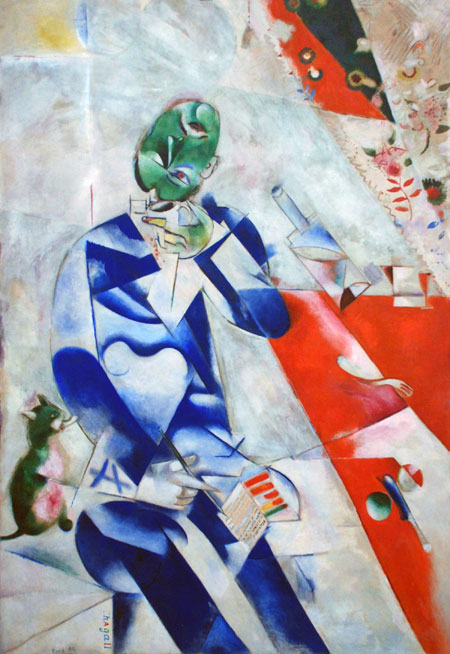 This work touched me because Chagall seems to be expressing a common artist's moment. Late night musing with a coffee cup in hand, the cat licking at you, a tipped wine bottle, and his notebook as he writes. 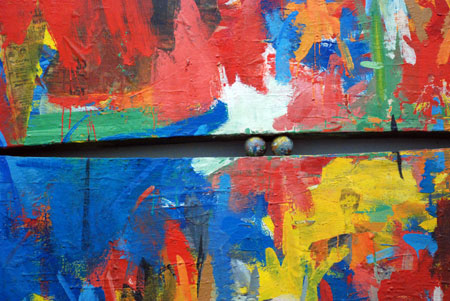 This piece just cracks me up. I can't boast to know much about Jasper Johns yet, but this piece done at the beginning of his career makes at least the most basic statement to anyone caring enough to criticize. 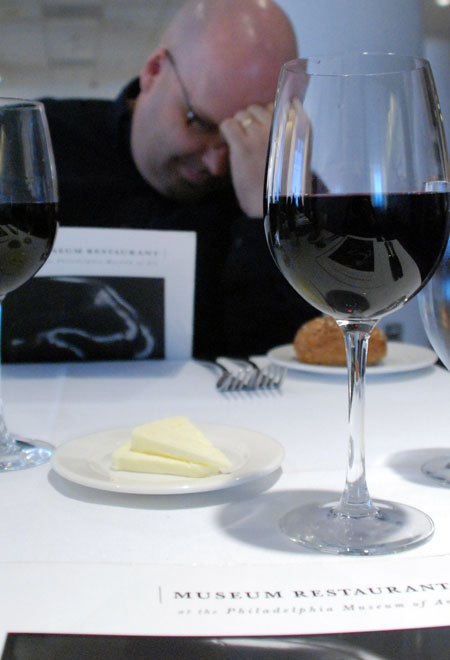 The food at the museum restaurant was a masterpiece. 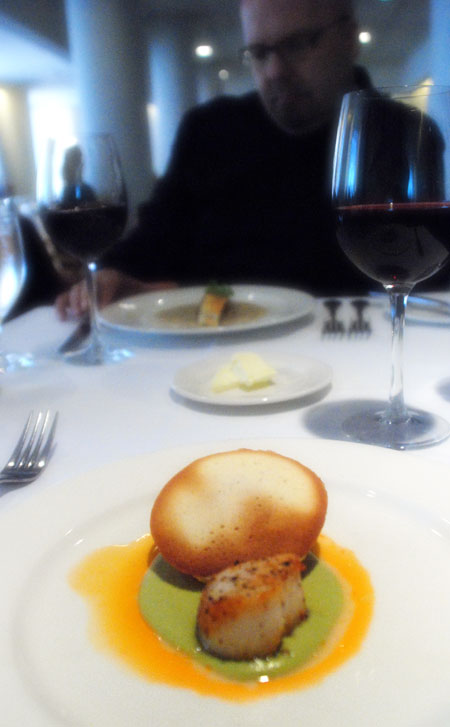 Here is Bryan in front of "Nude Descending a Staircase" 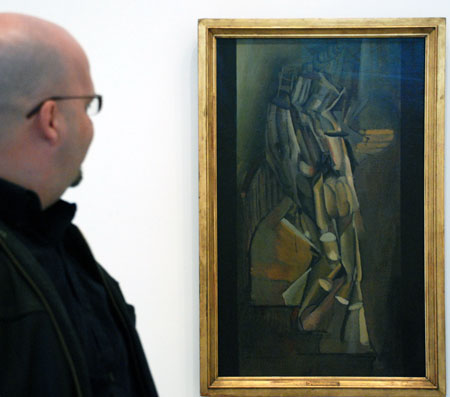 Today we are headed towards philadelphia for the emergent theological conversation at eastern university. Actually, it is only Daniel who is registered to attend. We are using his need for transportation as an excuse to go do some filming in the city of brotherly love. While he is engaging in the topic of "what would jesus deconstruct", Bryan and I will be looking at the liberty bell or the king tut exhibit or the Reading Terminal Market. No doubt the drive home will be filled with interesting conversation.

can't talk and blog at the same time

Apparently I can not be social and engaged with others and maintain a blog. Only so many words in my head I guess, when they are use up in conversation there are none left for writing. It is hard to believe I have let almost a month go by without spouting my thoughts on this virtual page. But there was much fun and special times had over the last many weeks.

My dear friend Anita made our house her launch pad for her fabulous europe trip. Many evenings were spent talking over cheese and a nice red. The days were spent checking out museums or shopping, and we even managed to have a good cherry blossom festival downtown with decent weather, and cherry blossoms! We sent her on her way and then two days later Bryan's brother Brent, his wife, Valerie, and their twin boys arrived. It is a new chapter in my life when I can report that I actually enjoyed cooking and entertaining all three weeks. The boys were so cute, but despite being twins they are nothing alike which presented a real challenge to their parents.

I will write more and post pictures soon but It was all I could do to just get these few words on the page before it looks as if april didn't happen in blogworld.

Anita and I at the National Gallery 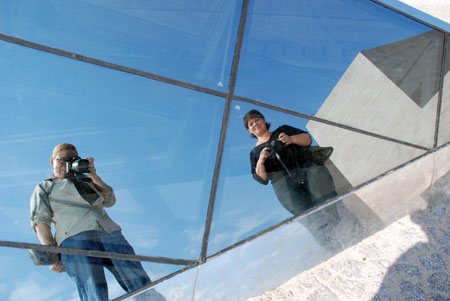 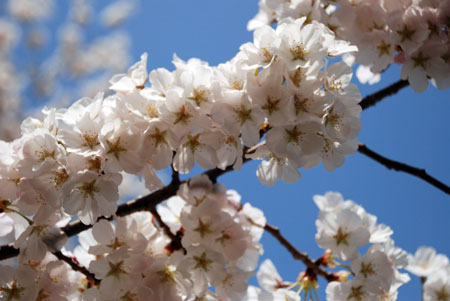 Clearly a future engineer in the making. 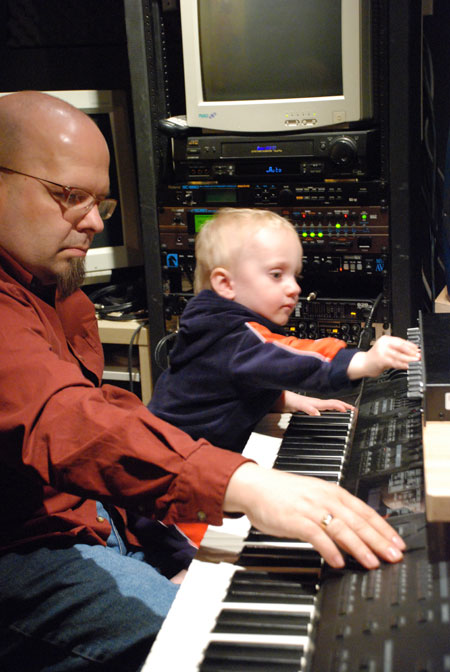 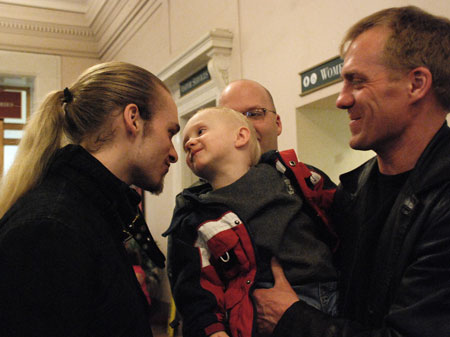 Brent and Silas with the cherry blossoms. 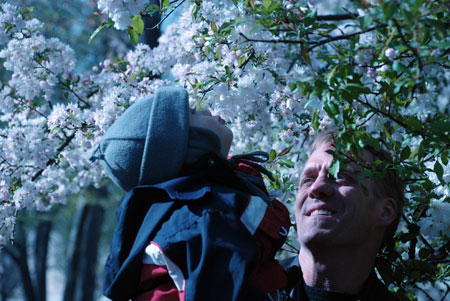 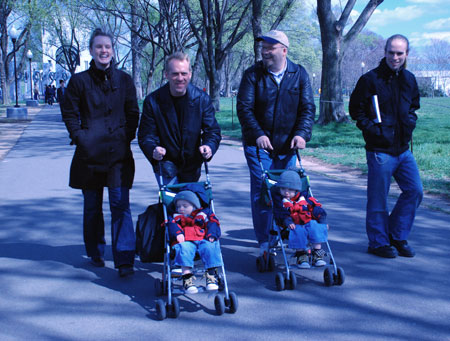 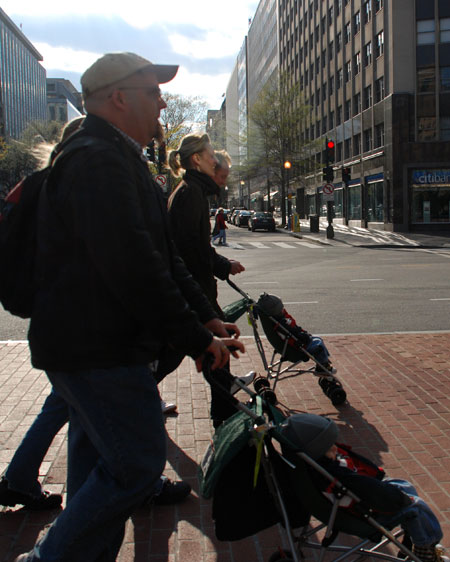 This page is an archive of entries from April 2007 listed from newest to oldest.

March 2007 is the previous archive.