paperwork=the end of the world

Totally hunkered down this week attempting to power through a huge to do list. Soon spring will be upon us. Though I can hardly wait for spring, I am painfully aware that the household chores planned for outdoors will take over and so I need very much to get some serious indoor work done. Photo collections to assemble, digital art to produce, and of course...

FAFSA, taxes, and the mundane everyday stuff that I have let slide and pile up is all... well, piled up.

Its an icky feeling and it wont go away until the papers do. I would much rather do the creative stuff, but even that seems overwhelming right now.

Why in the world is there paperwork? I mean really. The amount of energy alone it takes to sift through daily junk mail could be used for much more noble causes. Wouldn't the world be a much nicer, healthier place if we didn't have paperwork? No paper work would mean people's stress levels would go down and that would mean less heart disease and premature death. The earth would be healthier too because of the reduced waste and therefore less pollution. As it is we are burying ourselves in piles of papers advertising things we don't need(more mental energy convincing yourself that you really don't need that big screen tv). Ugh.

Simplified life is calling. And of course it is on a beautiful sandy beach.

But for now, patience, 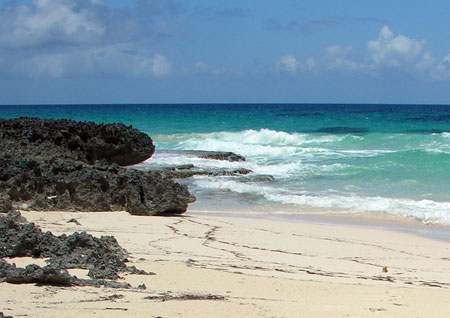 Daniel came home for a short weekend. We celebrated Daniel's much belated (thanks to me being in mexico) birthday with a dinner out on saturday. Here are the two guys discussing some point of philosophy as we wait for a table at a favorite haunt, eggspectations. Although these photos seemed to capture the intensity which is typical of the anderson conversations, there was much laughter and simple joy of being together. 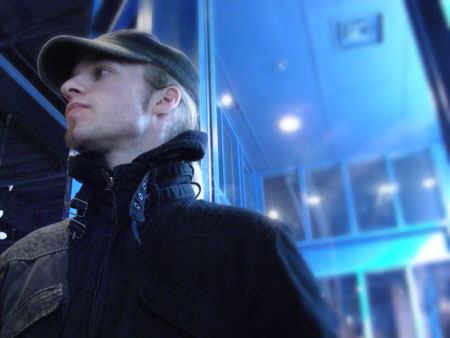 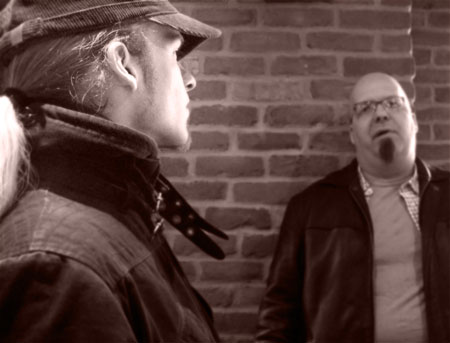 The weekend was low key and relaxed. Time for r and r for Daniel, and some poor weather indoor activities for us-working on video footage for the planet.

All too short, but its back to baltimore in a blizzard. I am SO ready for spring! 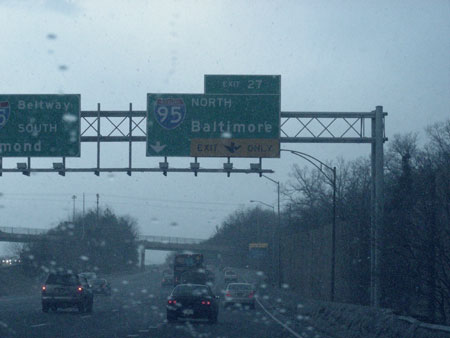 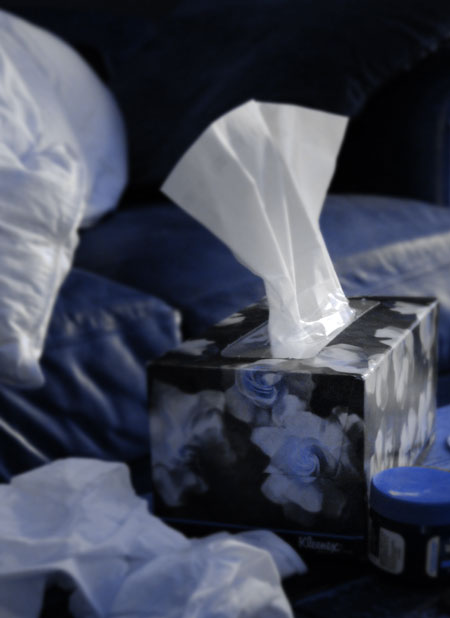 There is a saying that goes "They make things bigger in texas."

The last ten days I have had a whopper of a bug. Coming back from mexico I was feeling in the peak of health having sucked up some fresh mexico humidity and my share of fresh black beans and rice. I had even lost a few pounds.

But a day after I had arrived home it knocked me on my butt, leaving me sniffling on the couch pumping in orange juice and chicken soup until I was floating. The thing is I didn't get the bug from mexico. It was a little treat that one of the lovely texan gals was carrying around and apparently (unknowingly) passing on. Bryan had mentioned to me a couple of days into my flu that he saw a CNN report on flu season showing one of those maps that show which states are being hit hard by the flu. Texas glowed red. So of all the nasty potential bugs I could have gotten from mexico... I actually got one from texas instead.

I just had to go all the way to mexico to get it.

And what a lovely souvenir to bring home to my husband along with the hand painted terra cotta espresso cups. Yes he caught it too.

So for five days Bryan and I looked like bookends on our couch passing the box of kleenex back and fourth.

lovely little espresso cups and a wool shawl were the take home items from my trip. 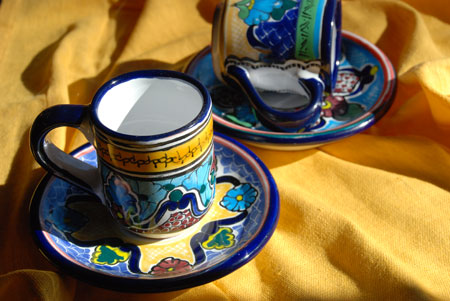 What a great time I had. And I came back with oodles of pictures. I am still getting used to the new camera but for the most part I got some good shots. More importantly I came away with a soul reminder of what powerful things can happen when women gather.

Colorful laundry and chickens were a consistent sight. 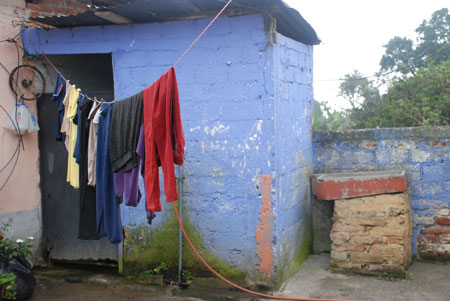 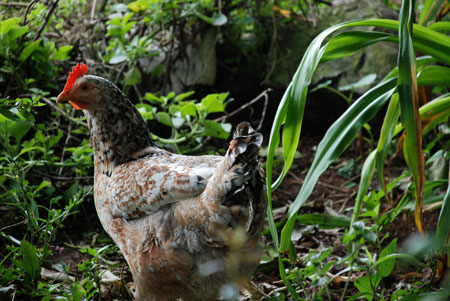 The "gals" from texas. 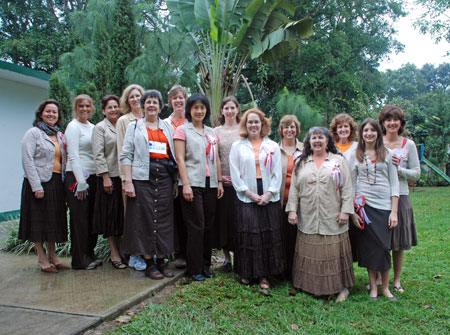 It is interesting to me that there can be an underlying sort of unspoken foundational understanding between women. Maybe it comes from the common experience of motherhood and rearing children that brings about this rich sense of being. Maybe it is other common experiences, but I do think that it is unique to women. And this deep sense of understanding transcends language. This was very clear to me on this journey. First with a group of texan women that I didn't know, and then later with these beautiful women of mexico. The gracious group from texas welcomed me into their group without missing a beat. I was comfy cozy from the first night and by the last I was laughing at their sarcastic jibes and good humor like I had been with them for years. This is what happens when women gather. The walls go down. 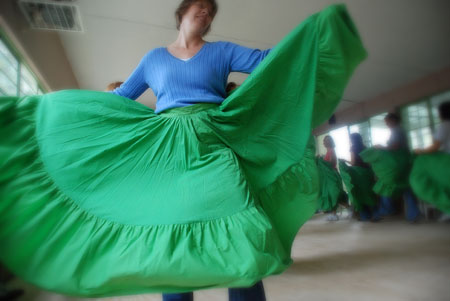 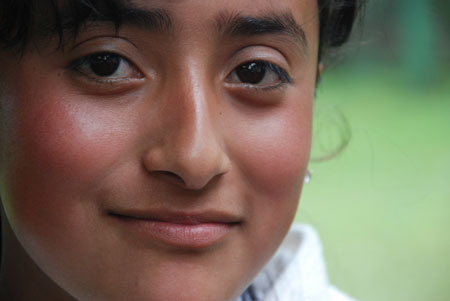 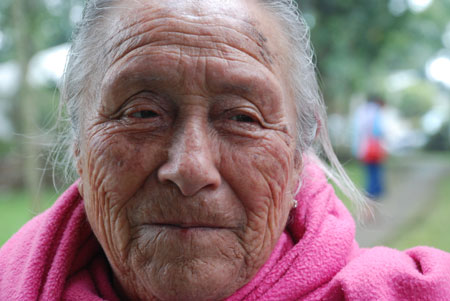 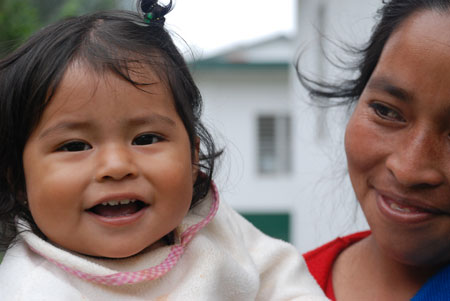 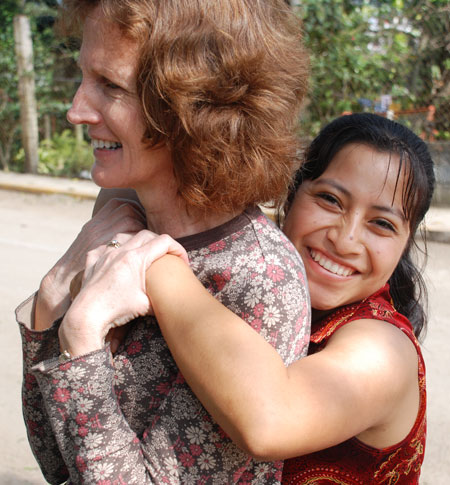 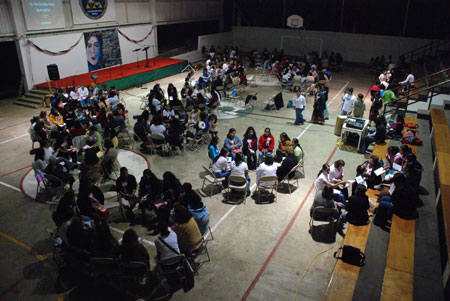 a walk around town-an invitation

Today was the first day of the two day event. Women would be arriving at roughly four oclock (and I do mean roughly). Time is a very fluid thing down here and I learned quickly that you either became laid back about it or lost your mind. I chose the first.

But before the festivities begin some of the girls from the school are going to walk through the surrounding town going door to door to invite women to the event. I am struck by two cultural differences right away, the last minute nature of this wouldn't work on american soil, and the door to door thing, well...

I was assigned to two girls and we were off to walk the town. I was amazed at the response. The girls would simply come to the front of a house and call out "buenes dias" and women would come out smiling. It was amazing. 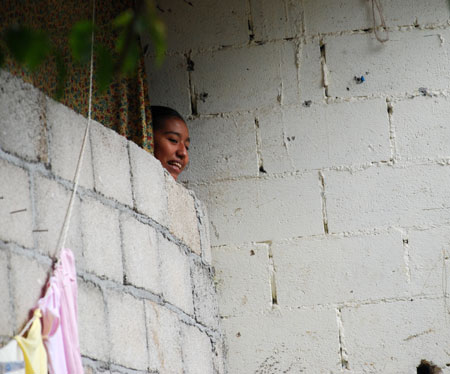 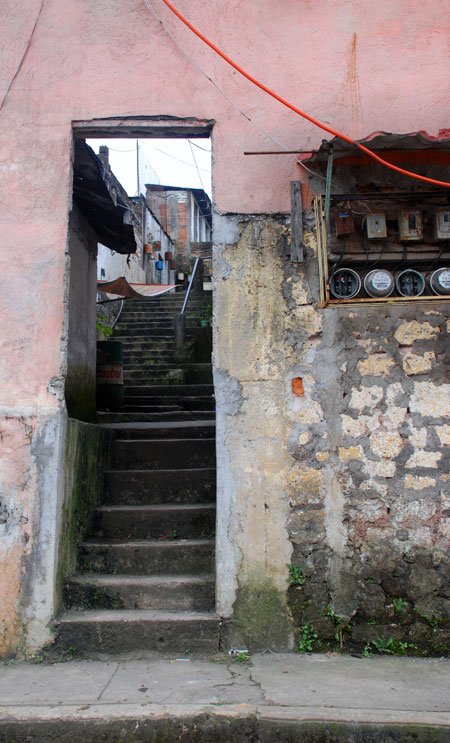 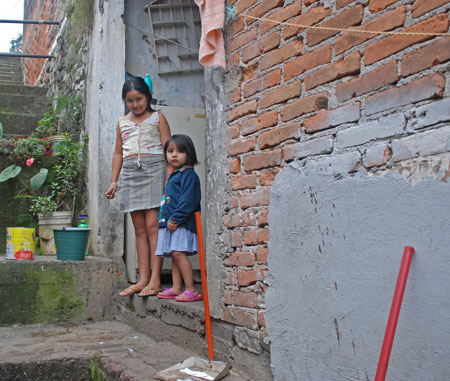 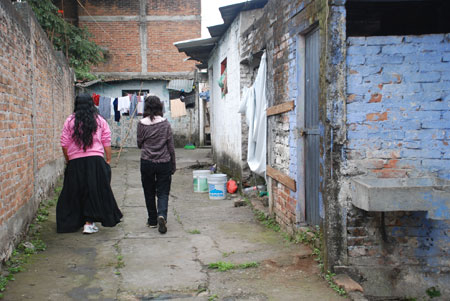 Here is Lesa with Rosbi and some of the girls that we walked with. 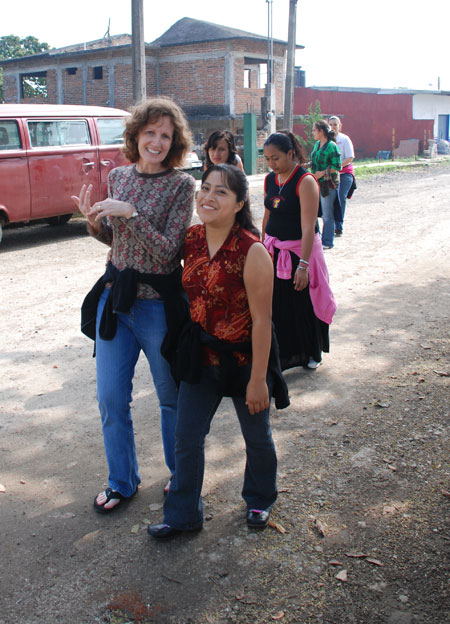 tugging on my heart

The group from texas comes down often to help the school and the other ministries that the school are involved with. One of these was an orphanage. So today I am told, we are off to visit the kids. 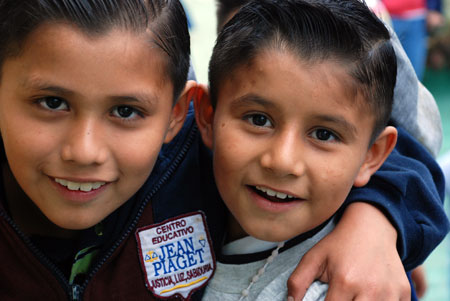 Susie holding one of the newest additions 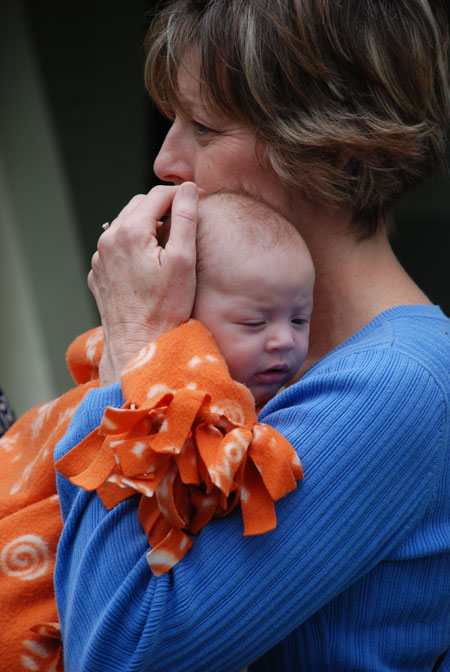 The girls performed songs for us and then included us in dance lessons. I was spared putting on a skirt because I had my camera and wanted shots of the dance. It looked like a lot of fun. 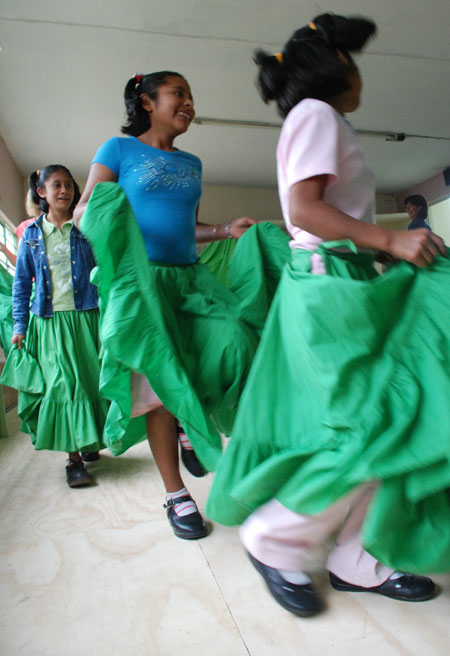 The women from texas brought gifts for each one of the children. This was a very moving thing to watch. The kids were so joyful and happy. I guess the place didn't exactly fit with what I expected an "orphanage" to look like. Still, celebration aside, these children either did not have parents, or were taken from bad family situations, or were abandoned. Their smiles tugged at my heart. 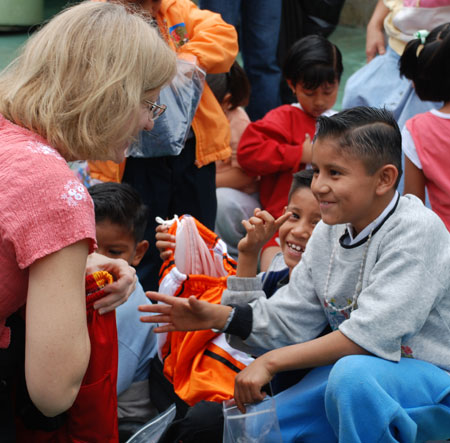 These guys liked my camera but this beautiful little girl was kind of shy. I later found out that she had arrived just days before, was thirteen years old and had never been to school. 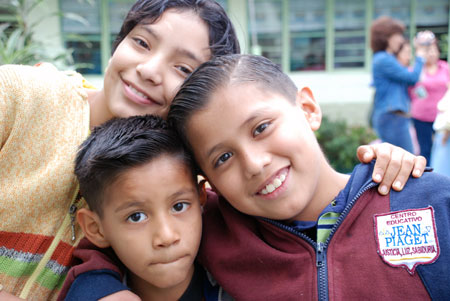 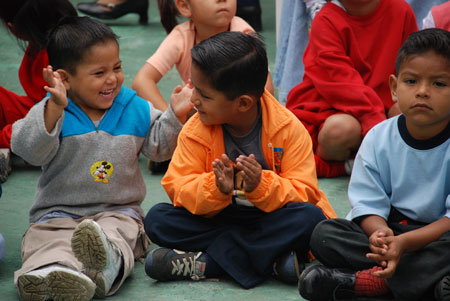 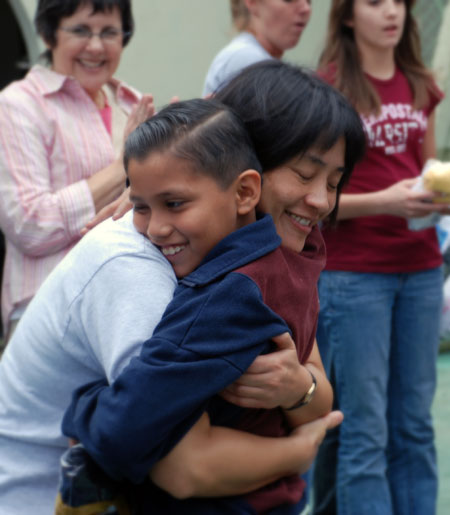 This page is an archive of entries from February 2007 listed from newest to oldest.

January 2007 is the previous archive.