It is the third day of Daniel being back to school which means we are up at 6 am again (without going to bed any earlier) which leaves that all too familiar feeling of sleep deprivation. And with that backdrop I check my email this morning at 6:15 to find this question from my sister.

how do you think choices you have made in your life have impacted the direction you have taken and are there any that you would change, especially choices that seemed inconsequential at the time but turned out to be important and have continued over time to have an affect on your life?

Too deep for such an early hour, but then again I think better in the morning than at night. And it is a great question.

Off the top at the most basic level there are no decisions that I would have changed. I can track how choices effected the direction of our lives as a family (and personally) but I think the bigger question is the attitude in which one faces the effects of the choices. And there are probably no inconsequential choices in that deciding what to have for breakfast might change your life. It's the butterfly effect. And then there is the question of faith. Does god direct every moment, or does he equip us to deal with them? Personality comes into play as well. Some people are more resilient than others.

Maybe I have been blessed by choices that at the time seemed less like a decision than an obvious course of action. Like marrying my husband. That was such a gut level thing that it seemed more like being pulled by a current than jumping into a pool. Made for a pretty stress free wedding day too, being that sure of something. And to this day it is the single, best decision I ever made.

And then there is Daniel. The choice of having one child never really seemed like a choice. Of course he arrived on the scene earlier than planned (not that we had a plan) but the real choice came later regarding having more. Our life has a different tone than our friends that have more children. And I like it, but others might not. Our dynamic as a family continues to give me joy.

Then there are career choices and location choices and those are major too. Some decisions I have made have been less than informed and the consequences have been huge learning experiences. I think I like these. Even though there is some discomfort in learning(especially when you are making a fool of yourself) I have liked what I am left with in myself and the change in my character in the long run with both the successes and the failures. Like me starting a business, and another until finally I got it right.

And there are moral choices. If I were to have any regrets they would involve decisions that I have made that may have been made selfishly and hurt someone else in the process. Like quitting a job that I had in college without giving notice to my boss who was a sweet, bookish, nerdy sort of man that took a liking to me. He was hurt. Not that a choice like that changed the direction of my life, but it was a flippant decision without regard for someone else. And it is telling that I remember it.

Then there are the seemingly "inconsequential" choices that can effect your life that may have more to do with someone elses action toward you which you have no control over. For me this came in the form of making the decision to go to the laundromat on tuesday instead of wednesday. Unknowingly, tuesday was the day that a recently paroled sexual predator happened to see me with my laundry, followed me home and broke his parole. It was my second year in college. So what was less of a decision than a whim could have been a catalyst for a particular direction in my life. I guess the real choice came after, what to do with that event and how did it shape me.

Which takes me back to the statement of, "Does god direct every moment, or does he equip us to deal with them?" For me, that moment directed me to believe the latter. And maybe that is the essence of a defining moment.

I guess we can look at choice in one of two ways. What do I get when I make this decision for me as an individual, or what do I give to others with this decision. I wonder if, "How then shall we live", is more about how our actions effect someone else than it effects us. Which is kind of counter to the current self-help brand of cultural christianity.

And maybe this removes the potential of the "what if" fear factor. Choices that are made are then just a series of steps that make up the entire journey. The amazing part is that no one journey is the same. It also removes the notion of "god's best" which promises certain prosperity if you just do everything right which perpetuates a fear of "what if I slip up, even by mistake"? That can be crippling. And where is grace?

On a smaller scale I can be the queen of doubt and disappointment if a choice seems to have caused a less than perfect effect. These tend to be over more personal comfort issues like leaving the house early to get to the movie on time to get a good seat so the tall guy doesn't sit in front of me so I can't see...petty stuff like that. And again only a perception of control when any number of things can (and do) happen on the way to the movie.

I think it might be kind of fun to draw your life like some sort of flow chart and speculate choices that could have been made differently to help facilitate the question. Kind of a scientific approach to, "It's a Wonderful Life".

Does anyone want to weigh in on the question?

Trying my best to get back in the rhythm of life and I have come to a conclusion,

I need to let go of the concept.

At least the concept that there can be a steady routine of any kind. Actually it is just my limited view that needs tweaking. There is a rhythm, it just ebbs and flows in larger chunks that what tend to fit my definition. So instead it seems more like chaos theory. Taking a four week "working" vacation was one of those life altering experiences and although my personality longs for consistency and stability, I can't deny that consistency and stability are SO BORING. I fool myself to think that they are actually comforting, maybe even virtuous, but really that is a lie. Traveling is the most destabilizing unpredictable, and potentially uncomfortable thing a person can do. And those things can be the most eye opening, character changing, and spiritual growth inducing as well. Traveling with an attitude of openess to actually learning from another culture rather than packing some north american know-it-all attitude allowed me to grow. Taking some chances instead of only selecting the pre-packaged tourist-pallatable experiences helped with this growth process too. But being on sabatical is where it began.

So what on earth am I rambling about.

Being yanked, torn, ripped, or mildly encouraged (by god) to leave conventional full-time weekly ministry over a year ago, pushed my little family into a wonderful, painful, exciting, terrible spiritual journey that included complete sabatical from church attendance. Actually, that is not completely true, Daniel still attends, but mostly for social reasons. But what this caused was a real search for god outside of some long established evangelical ministry habits. I am not saying that these habits are all bad, but some in fact, are and are causing good folk of good conscience to step outside those limitations and see god in a new way, a real soul-splitting, earth-shaking, holy-cow, way.

I know that our little trip to Europe would have looked a whole lot different to me five years ago. I would have viewed every cathedral with some sort of post-reformation induced superiority that would have kept me from really thinking about the history of the church, of christianity, and my little place on that amazing timeline. I would have missed the beauty through my well-honed evangelical judgement. I would have viewed someone with a faith that didn't look just like mine with that same judgement and even pity while holding onto my sense of entitlement as "chosen" and completely missing the giant log in my own eye. I would have side stepped anything appearing idolatrous for fear of getting my soul dirty and thus missing the bigger picture. I would have come home well protected by stale doctrine, very comfy in my superiority, and totally unchanged.

Instead I was allowed to see god outside the comfortable, limiting formula that I learned so well. I'll stop searching scripture for the verse that says that jesus is "your personal savior" because I know it isn't there. But I do know one that says "god so loved the world"... and I am part of that world, just not the center of it, and that makes it such a beautiful place, and god is SO MUCH BIGGER.

perspective has been tweaked, and the journey continues.

Someone who expresses part of his journey vividly is my son. Read at your own risk as he holds nothing back with creative allegory, and strikes a chord with his honesty and heart. See Daniel's thoughts here. 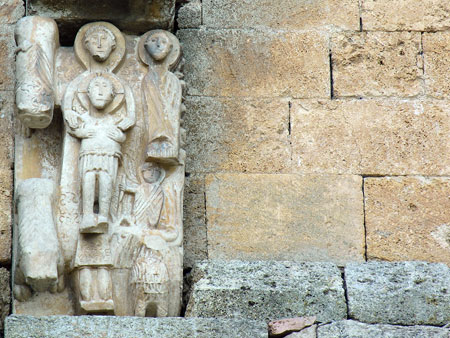 Crazy how time scoots right past you. I am still catching up on work and normal life and have somewhat denied the everyday blog time in order to blog the euro-trip. I have a few days left to add but realized that my main page was blank-IT'S AUGUST!

So if you are still tracking with my trip-blog that I continue to add to (along with new video clips thanks to my sweet hubby Bryan) you can click here to see all the links to our trip. The rest of ROME and DUBLIN is coming soon (in between avp business work and loads of laundry)!

This page is an archive of entries from August 2005 listed from newest to oldest.

July 2005 is the previous archive.

September 2005 is the next archive.